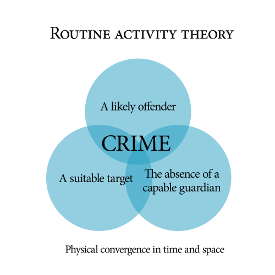 "Routine Activity Theory is mainly a macro theory of crime and victimization. It requires motivated offenders, but does not explain how such offenders become motivated."

I've had several allergies all my life.
One of them I was unaware of, it was an undiagnosed mystery.
Symptoms were five minutes bursts of coughing and a very runny nose.
They were steadily becoming more acute in my mid 40's when I first mentioned symptoms to a doctor.
He became rather hostile and prescribed cortisone nasal spray which did little to help.

Unknown to me I also had an accompanying puffy red face which lasted for hours.
Sure I noticed people look at me but strangers rarely make useful direct comments. The usual vain glance in a passing store window is not the same as an examination in the mirror.

It took another dozen years to finally self diagnose when the symptoms became increasingly worse.

Sulfites & sulfates... Everything has them!

For years my entire morning routine was a disaster. All the milk substitutes, nature cereal, raisins, coffee and especially the toothpaste increasingly produced delayed responses. From prodigious salivation, runny nose & coughing, even puking (without nausea).

Until 2014 I had no idea what caused the symptoms.
Previously I had been casting about with various home remedies. The magnitude and types of reactions were increasing, providing a hint of a vector yet still mysterious.

Who could imagine the causes of such a range of reactions?

Making the connection is not easy or obvious until you do.
My research methods finally got smart, I started to use logic.
Not drugs/alcohol/substance abuse.
Not rhinitis.
Not dandruff.
Not seasonal.
THEREFORE, AND, IF.

The epiphany was like a sad Einstein moment, most of the information coming from the University of Florida <http://edis.ifas.ufl.edu/fy731>.

It took a while to sort through all the foods and products even with my culinary/product manufacturing background.
Even omitting SLS shampoo within one week my scalp was perfect. (That was problematic since I was a child)

But, prior to those revelations...

I would try to anticipate a likely coughing jag when driving or on public transit. The coffee shop on every corner was an easy solution to mitigate a cough with a soothing hot beverage and a bagel or raisin bran muffin.

>>> Dark roast coffee develops higher levels of sulfites through pyrolysis, store bought bagels have sulfites because of the egg content, no dairy for me so I opt for those little packs of jam... ooh (x)(x).

Travel sized toothpaste (when at work) was the worst, it produced a patchy puffed up face like a comedy sketch bee sting.

Everyone quietly freaks out when someone coughs or shows a general indicator of ill health. Mostly justified because of flu but how far do you go?
The latest panic is all about drugs and addiction but you can't say that out loud without proof only hint or gossip.
In past centuries it was all about the pox or plague, real dangers to be sure. In those days folks accuse of being a witch was less dangerous but by all reports, society did produce some wicked responses.
Nowadays police and security facilitate societies worst panic responses by interfering at your work place, gossip, negative social engineering, peripheral messaging, undercover provocateurs, crosswalk endangerment etc, etc, without an end date or allowance for error correction.
Kind of similar to the options of 'drown or burn'.

Help us deliver fresh insights on the influence of social engineering, provocateurs and interference over your life, family and livelihood. Please make a donation, every little bit helps.

... a macro theory of crime and victimization. It requires motivated offenders, but does not explain how such offenders become motivated... or even if they are motivated and not just labelled as such.